With the closing of London’s Olympic Season for 2012, my thoughts turned to the host of the 2016 Games and the 2014 Football World Cup, Brazil. With the sporting world’s eyes on this South American powerhouse, no doubt interests will also increase for their national spirit, Cachaça.

Anyone who is familiar with the drinks industry will know that Gin, Cognac, Rum and, now, Tequila have all grown in popularity, but, for many, Cachaça still remains an unfamiliar spirit.

An introduction to what Cachaça is can be found here on the Amathus site and so, to avoid repetition, let’s move on to looking at one brand in more detail.

Germana is made by Uniagro, but was first made by the Caetano family on their Vista Alegra ranch in 1912; the family still retain some ownership today. The name “Germana” means something that is genuine, pure, without mixing. It was also the name of a mystical nun who used Cachaça in medicinal preparations.

Germana is an artisanal Cachaça, made without the addition of sugar or chemicals and from spirit that is distilled in copper pot stills. They also use natural fermentation (using the cornmeal-fed yeast in the sugar cane) for their mash.

Today, we are looking at their Unaged Cachaça (40%ABV), but Germana also make Cachaça that has been aged for 2 years and 10 years, as well as a Single Barrel and a Heritage bottling. Some of the bottles are wrapped in dried banana leaves, which is hark back to a tradition started a century ago to protect the bottles as they were transported.

On its own
Nose: Very fruity: figs, raisins; lots of jammy fruit. Also, a touch of spice.
Taste: Quite thick in texture, this is also rather rum-like, with flavours of dark treacle and raisins. It reminds me somewhat of Pusser’s or Wood’s Rum. The finish was clean, woody and dry.

Caipirinha
Cooling and clean, with some hints of smoked ham and anise. Simple, but effective and with character, this is very easy to enjoy, having some depth but not being overly-complex.

But there is more to the spirit than these two drinks and it is not just a beverage for the hot months; to illustrate this, I have used the unaged Germana in four seasonal cocktails. 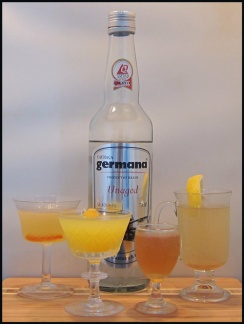 Spring – Marmalade Sour
[30ml Cachaça. 10ml Lemon Juice, 1tsp Marmalade, 2 Dashes Orange Bitters – SHAKE]
This is a variation on Harry Craddock’s Marmalade Cocktail.
This drink is superb. I like gin, but I actually prefer this drink with Cachaça. The sweet, juicy elements of the Cachaça complements the rich, bitter-sweetness of the marmalade, with the lemon juice bringing balance to the drink. Delicious.

Summer – Woody Woodpecker
[40ml Cachaça, 15ml Orange Juice, 10ml Galliano – SHAKE]
OK, so this is not exactly the epitome of Brazilian tradition, but it’s a variation on a drink that many will be familiar with, the Harvey Wallbanger.
The drink is smooth and clean, but surprisingly sweet, making it more well-suited to a post- rather than pre-dinner drink. The sweet Galliano brings out the sweet, fruity flavours of the Germana. For a tarter drink, add 10ml of lemon juice.

Autumn – Rabo de Galo
[30ml Cachaça, 10ml Red Vermouth – SHAKE]
A traditional Brazilian cocktail, this is simple, but packed full of flavour. Warming, with the herbal notes, this is well-suited as an aperitif to stimulate the appetite. Very tasty.

Winter – Quentão
A traditional drink for the Brazilian Winter; a sort of mulled Cachaça. I used a mix of Cachaça, sugar, water, ginger, cloves and other spices, along with citrus peel, which I heated in a saucepan and then served in heatproof glasses.
The spicy ginger and christmas spices complement the juicy and jammy notes of the Cachaça, making for a cosy, warming and comforting drink – perfect for keeping the chills at bay.

After exploring Germana Cachaça a little more, I am impressed with its versatility, being easy to use in a whole range of cocktails, from summer coolers to winter warmers. My favourite was the Marmalade Sour, although I am quite fond of drinking Germana on its own.