Just over 2 weeks ago we saw the arrival of our new agency whisky, Wolfburn. This was a very exciting time for us, not only to have this wonderful whisky added to our portfolio but also because it’s a brand new single malt whisky, fresh to the market. This doesn’t happen a lot in the whisky world, so you can imagine how ecstatic we were to be given the honour of distributing Wolfburn throughout the UK.

So here’s a bit of background for you:

In 2011 the founders of Wolfburn Single Malt Whisky travelled to Thurso in Caithness, in search of the old Wolfburn distillery. All that remained was the flow of water that once fed the mash tun and stills many years ago. The team were convinced that if the water was still there, then the whisky could be too. In May 2012, the purchase of the land was finalised. By January 2013 the new Wolfburn distillery was complete and on Burns Night, a cask of Wolfburn Whisky – the first for nearly 150 years – was laid down in Thurso.

Using unpeated malt, master distiller Shane Fraser and his team have crafted the latest incarnation of Wolfburn Whisky from a blank canvas by pot still distillation, the old way; no automation, no rush and a lot of care. Aged in Spanish and American oak casks, Wolfburn Single Malt Whisky is wonderfully unique in flavour. It’s light and fragrant with aromas of fruit, malt and a hint of peat. It’s sweet and nutty on the pallet, leaving a pleasant flavour of smoke in the mouth. 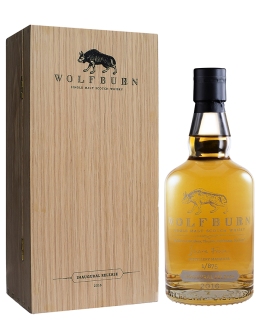 As well as the Single Malt bottle there is also the Inaugural release. Crafted from the very first casks from the new Wolfburn distillery, it’s truly something for collectors and connoisseurs. Limited in number to 875 bottles (100 for the UK market), each individually numbered and engraved, and presented in a hand-made oak box.

The whisky inside was selected by Shane Fraser specifically to become Wolfburn’s first. Using long fermentation, long slow distillation, and matured in hand-selected casks, it is genuinely something very very special.

Since its release on the 14th March, Wolfburn Whisky has already taken the market by storm and is fast becoming a whisky that everyone is talking about. From articles in Harpers Food & Drink Magazine to fantastic reviews from the likes of Dave Broom, a very well-known writer in the whisky world. Scoring it an 8/10 and branding it ‘one to watch’, Broom adds ‘I’ve been impressed with Wolfburn’s quality from the word go and this doesn’t disappoint.’ 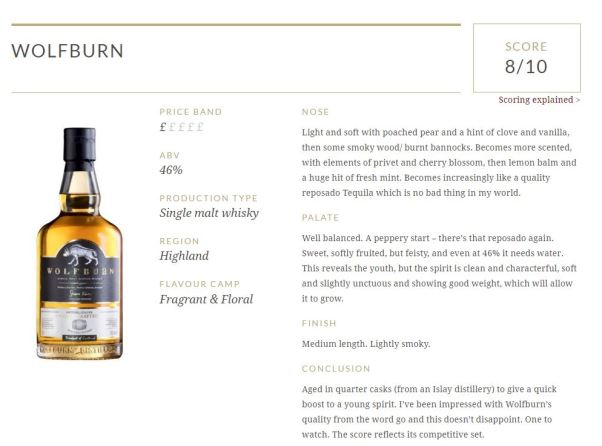 If you require anymore information on any of the two products, please visit our website or pop in to your nearest Amathus store.